It’s been a while since I’ve posted an update on where I stand in my journey to better understand the role of women in ministry. Since my earlier posts, I haven’t felt like I’ve gone back and forth as muchin my struggle to understand. It’s almost as if the distance between the “back” and “forth” places is lessening, and I’m finding a clearer path I keep returning to. 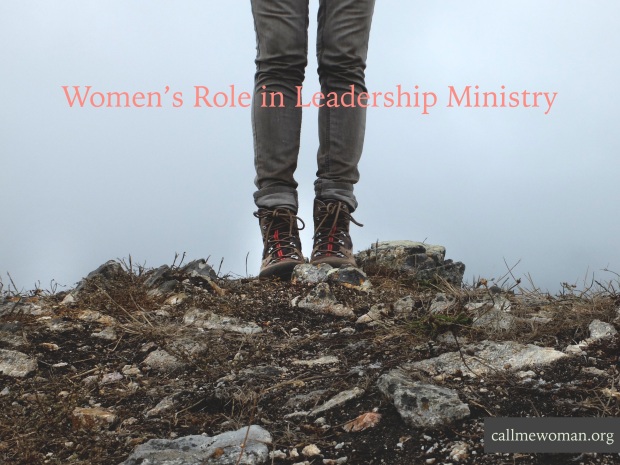 As you know if you’ve read some of my blogs, women in leadership ministry is an issue I have thought about and greatly wrestled with over the past two years. These past posts probably lean more towards my very personal struggle to find my own role since since I am a leader, strong-willed, and in ministry:

Finding Identity vs. Discovering It

But let’s get back to that “clearer” path I was talking about.

We all know there are verses in the Bible that seem to suggest women take a serious back seat when it comes to church leadership. Let’s take a look at one of the most common:

Women should learn quietly and submissively.  I do not let women teach men or have authority over them.  Let them listen quietly.  For God made Adam first, and afterward he made Eve.  And it was not Adam who was deceived by Satan. The woman was deceived, and sin was the result.  But women will be saved through childbearing,  assuming they continue to live in faith, love, holiness, and modesty. 1 Timothy 2:11-15, NLT

First let me say this: I’m going to state my opinions and current thoughts on the matter here. I enjoy a healthy debate so I’m comfortable with people sharing differing views on this – especially since it’s an area I’m desirous to learn about, seeking wisdom in, and am passionate about. That being said, I’m not looking to stir up contention or offense, I’m simply sharing my thought process and current understanding of the matter.

Basically, I believe the issue addressed in 1 Timothy 2 was mainly contextual, situational, and cultural.

Culturally: Men would not have responded well to being taught by women at that time.

Situationally: There were probably women in that specific congregation causing disruptions during the services.

Contextually: Paul knew that ultimately, when he said “women need to learn quietly and submissively” he was saying that women who are not as mature in their faith should be learning from their spiritual leader (husband) who they submit to as their husband and spiritual head.

That last point is definitely still the case today: women need to submit to the authority of their husbands, the head of the home – and he should be taking on the responsibility of spiritual leader, teaching and encouraging his wife and family towards spiritual maturity (Ephesians 5:22-26). The cultural point of how men respond to women in leadership is still the case in some areas, and not as much in others.

Women in the Bible

It’s no question God used many women in the Bible to fulfill his purposes. Often the first to come to mind is Esther, who was used in a powerful way specifically within her role as the wife of a man.

But what about the women who God used in powerful leadership not strictly within the role of wife?

If I was asked today what I believe as far as women in leadership ministry and/or women preaching to a co-ed group, this would be my answer:

Our culture predominantly responds better to a strong male leader. However, it is not unbiblical for women to lead.

Just like many men, many woman are individually gifted with the spiritual gifts of apostle, teacher, evangelist, pastor, or prophet, and gifts that are even more evident than these such as speaking, knowledge, wisdom, leadership, and administration.

I don’t think these gifts given to women should be shared only with women, just as many of the women in the Bible were not called to limit their gifts to women only – even in a much more patriarchal society than ours is today.

I am completely for women speaking or leading in worship. I am less for women being lead pastors because I don’t believe it’s the most effective form of ministry in our current culture (at least where I’m from). However, I believe women are sometimes called to fill the place of men when men don’t step up, until a man does step up.

Also, I believe some “leadership” roles are definitely more servant-oriented leadership roles. These should without a doubt be open to women. Like mine for instance. I’m a small groups coordinator at my church. My job is not as much to lead as it is to serve the pastor’s vision by carrying it out in a specific arena with a specific group of people and serving those group leaders by resourcing and supporting them.

Finally, I believe the title “pastor” means something totally different today than it did when the Bible was written, which leads to so much confusion today regarding church roles period.

All that being said, I seriously appreciate the debate and the struggle to understand this issue.

I could (and probably will) write a whole other blog on how the marital role does or does not play into the gender roles within church leadership. That was a huge part for me in even getting to these conclusions.

But for now, this is where I keep landing. This is something I feel confidence in sharing with others. It’s also an area where I’m completely fine admitting I’m open to the Holy Spirit teaching me further about.

So I’ve completely unleashed my current understanding of women in leadership ministry. What do you agree and disagree with? Where do your questions or doubts come into play?