As you may know from my original post of this year’s New Years’ Resolutions, February’s resolution was to spend more intentional quality time with my husband, and March’s was to fast regularly.

I did do both of these, however, because of their personal and private nature, I decided not to elaborate on them. I will say that the intentional time spent with my husband proved that it is something I can do, make more room for and improve upon.

While I technically completed the fasting resolution, I did it half-heartedly the last half of the month. The first two weeks were so edifying and spiritually refreshing and encouraging. The final two weeks reverted back to display how much of a challenge this spiritual discipline has been for me. It deserves much more attention in the future.

This month’s resolution was a challenge for much different reasons. As you may recall, April’s resolution was to workout more frequently than usual – about 5 days a week. When I initially made this resolution, it looked like it’d just be one level higher than what I was already doing.

At the tail end of 2013 and beginning of 2014, my husband and I had begun tracking our calories, nutritional intake and exercising more. I had a personal goal to workout 2-3 times a week indefinitely, aside from my New Years’ Resolutions. However, due to some unexpected weight loss I’ll dig into later, and a second part-time job, the challenge was a bit steeper than I anticipated.

The second job made it so I’m now working full-time hours total, not counting the hours I volunteer helping with our youth ministry. The second job also has more rigid work hours than any of my previous jobs, so I needed to adjust my schedule.

All excuses aside, the first week of April I did well. I tried yoga, something I felt would tone and give me a good workout without shedding calories. I started an April yoga challenge and created my own workouts for the first week and a half. But I don’t really know enough about yoga to have created a successful plan and it soon fell to the wayside. 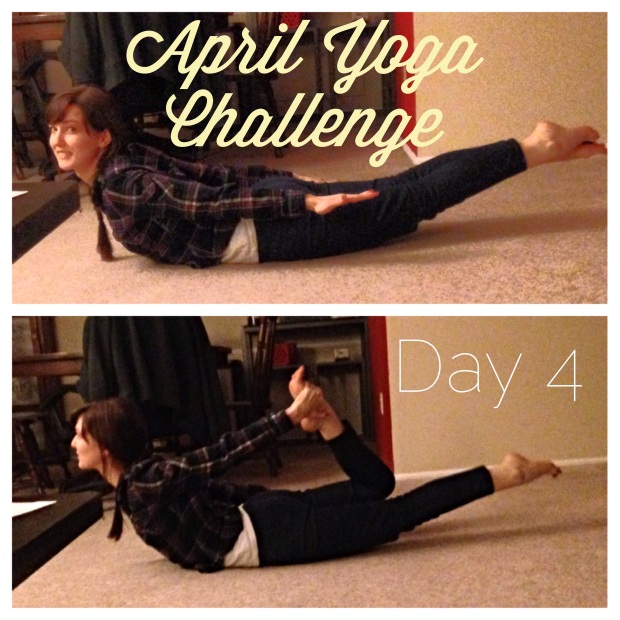 Yes, I’m in skinny jeans and a flannel shirt. Is there another way to do yoga?

I was successful at this until about mid-March. I had experienced unexpected weight loss that dipped lower than my BMI range (although I know the BMI scale calculator is flawed, it was still a bit unnerving). I attempted to switch my workouts to focus more on weight training to gain muscle, but still struggled to find a new flow – the one I had for 3 months had been motivating me so well. I decided I didn’t want to do gym workouts as much until I could visit a doctor for advice on working out and eating right without dropping the weight.

The most unexpected thing was definitely the weight loss. That combined at the some time as the new schedule and job change was unforeseeable when I was planning which month would be good for which resolution.

The biggest changes that have happened between my last resolutions update and now are simply because I’ve let everything slide under the excuse of my new work schedule. Yes, a new job is listed as one of the most stressful life events, but I still feel I could have attempted to handle it better. A month later and I think I’m recouping, but my last update talked about how I was overall managing my life better: water, sleep, healthy eats, time, etc. All of those things and more have taken a back seat to a busy season.

In the future, I’d like to create some sort of plan to maintain the resolutions, e.g., if it takes 21 consecutive days to form a new habit, all my resolutions should involve some sort of daily involvement. My resolutions thus far involved only 1-3 times weekly commitments, and are a lot less likely to see success or anything past the month I devoted to them.

Any ideas or suggestions for me moving forward with these three?